Looking for a Mantra is available from CD Baby. 13 songs for 10 bucks... cheap. 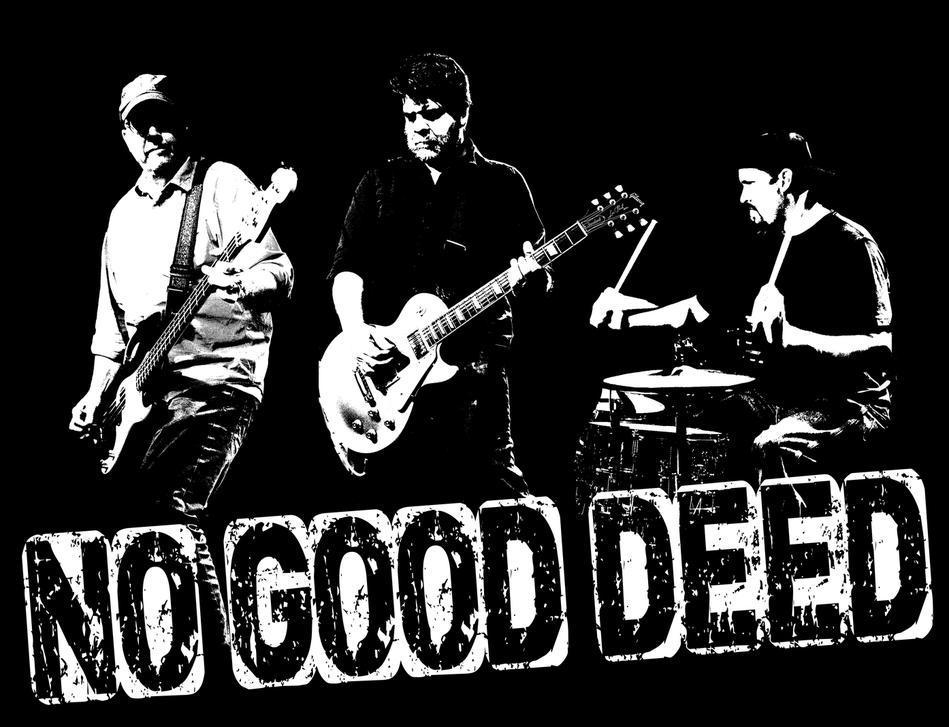 No Good Deed. All rights reserved.

No Good Deed is a rock band from Des Moines Iowa comprised of a group of battle scarred veterans of the central Iowa music scene. Their debut disk "Looking for a Mantra" is a collection of guitar driven songs with lots of hooks and vocal harmonies that is sure to satisfy.

If you’re looking for beefy heartland rock ‘n’ roll with enough of a pop sheen to make it palatable, you’re “Looking for a Mantra.” These fo​ur guys, veterans of the no-BS Midwest scene, rumble like they’re trying to keep the years at bay, and they’re succeeding.

Guitarist/vocalist Doug Hansen drops fat chords and takes instrumental breaks in unanticipated directions. At times it’s the sonic equivalent of watching a mountain biker with a ProCam wobblying at the edge of a vertiginous cliff. Hansen is the dominant songwriter with six and one-half writing credits (the half shared with drummer Tim Schmitt) but everybody contributes to an effort made vastly more formidable through the efforts of many hands.

No Good Deed’s component members have been around the scene for a couple of decades. In a way, you could call the band a kind of “super group” of early-’90s Des Moines influences. The band’s recent release, “Looking for a Mantra,” exemplifies that idea. The album moves along at a good clip, dishing out track after track of down-home, Des Moines rock. Perhaps the best example is the fifth track, “Eulogy.” There’s nothing particularly daring or wildly inventive about the track, but it is well-constructed, catchy as hell and presented in a straightforward manner. Lead singer Rob Reeves and guitarist Doug Hansen drive No Good Deed’s sound with a classic combination of clean vocals and crunchy rock riffs. It might not be hipster-slick, but it’s definitely still cool.

No Good Deed’s "Looking for a Mantra" sounds like a greatest hits or anthology collection put out by a band that has accumulated years of experience and material. The versatility of the album probably comes from the two decades of experience each musician brings to the Des Moines band.

The album features 13 tracks of high-energy rock with post-punk and hard rock flavors. In that variety, there are sounds of 1980s and 1990s hard rock to pop-sounding tracks like "If I Confess" and "Frank Sinatra."

Much like Cedar Valley bands House of Large Sizes and the Mittens, No Good Deed are what some people might call old-timers (all of the members are older than 40) who have stayed true to loud, fast rock 'n' roll while resisting grunge and other dreary sounding trends from the 1990s.

"Feeling Better" epitomizes this with layered, fuzzy sounding guitars and harmony vocals, while "Back in Time" almost sounds like it could be from No Good Deed’s quasi-metal phase (though they haven't had one). The similarity in sound from these veteran rockers isn’t just a coincidence. Lead singer Rob Reeves, a Waterloo native, went to University of Northern Iowa and recalls catching performances by House of Large Sizes.

The album was produced on the cheap and recorded it in the group’s practice space. Guitarist Doug Hansen mixed and engineered the tracks. However, the sound holds its own when compared to expensive productions from groups of similar genres. "Looking for a Mantra" shows exactly how good, energetic musicians with decent amplifiers do more to create a solid rock album than expensive post production ever does.

​​No Good Deed is a band from Des Moines, Iowa comprised of Rob Reeves (vocals), Doug Hansen (guitar, vocals), Jeff Morgan (bass) and Tim Schmitt (drums). The band formed in 2011 and ended up playing the Summerland Tour with Everclear, Sponge, Filter and LIVE. After taking a listening to their album Looking For A Mantra it doesn’t take a lot of guess work to figure out why they were asked to play. I’m sure you already figured out that the commonality of all these bands is they have what you can call a ‘90s alternative sound.

The songs on Looking For A Mantra sound like a mix between The Gin Blossoms and Urge Overkill. I think the appeal of their sound may be a generational thing to some extent. If you like myself were in high school or in your twenties in the mid ‘90s I think you most likely will have a soft place in your heart for Looking For A Mantra. This type of music is probably a bit less forgiving with people who are in that age bracket now.

The album was recorded and mixed by the band but mastered professionally. I have to say the results are pretty impressive for a number of reasons. First off the band really nailed that ‘90s sound that only added to the nostalgic effect of the music. Second, it’s a fact that a mastering engineer can only do so much with a bad mix. It was obvious to me that the band knows what they were doing when it came to recording and mixing because all the elements were clear in the mix and I didn’t hear a lot of the common pitfalls you can hear on DIY recordings.

Looking For A Mantra comes in at thirteen songs, which for this day and age is a lot of music to consume. Even though there were a lot of tracks most of them were around two to three minutes, which kept the energy flowing. The journey through the thirteen songs is pretty consistent and the band doesn't deviate too much for the ‘90s power pop sound they establish.

From the get go you get a nice dose of distorted guitar, hard-hitting drums and catchy vocal melodies. They start out strong with “The Truth,” “Frank Sinatra” and “Here I Am” all of which are upbeat rocking songs that can pretty easily get stuck in your head.

The only minor deviation comes from “Back In Time,” which sounds more like a ‘90s Tool song during the verse. They rock out pretty hard and are on the verge of metal at times. As the album progresses, there were a couple of more songs that were notable including “If I Confess” and “Doubt.”

Looking For A Mantra isn’t an album that is trying to reinvent the wheel but rather it tips its hat to music that has come before. If you were into ‘90s alternative music and can’t get enough then this album is a no brainer but if you left that music in the ‘90s then this might not be up your alley.

​No Good Deed is refreshing, not only because there aren’t enough Des Moines area bands doing the post-punk sound well, but because it is a band without a single member younger than your faithful scribe.
“I came from Ames, originally,” said guitarist Doug Hansen. “I was a part of the music scene in Des Moines back in the late ’80s.”

No Good Deed’s component members of Reeves, Hansen, bassist Jeff Morgan and drummer Tim Schmitt cut their teeth in some of the great central Iowa bands of the ’90s: Squidboy, Movable Feast, Supervolt and The Miltons. But they all came together as a band in a decidedly 21st century manner.

Once the four guys found each other, the first batch of songs they started working on came from a bunch of demos Hansen brought with him to the group. That gave the group a nice place to jump off from, but it also kept them from forming a true identity for a while.
“I’ve always said that if we get around to making another album, that’ll feel a lot more like us,” Schmitt said. “This one (“Looking for a Mantra,” released last month) sounds really good, but it’s a little bit schizophrenic, because it came from all over.”

But the band members are still proud of it. Done on the cheap — they recorded it in their practice space, and Hansen mixed and engineered it himself — the album captures the band’s loud, driving sound. But No Good Dead is a group that feels like it is just starting to hit its stride.

“If you were to listen to the songs played live now, they would sound very different from their recorded form,” Reeves said. “We’ve played them and worked on them, and we’ve really found a new sound for them.”

No Good Deed certainly isn’t the only band of “old timers” out there. Squidboy is still going strong after 20 years, and House of Large Sizes started playing again a couple years ago. But the more the merrier. Keep on rocking, No Good Deed, and let the millennials and hipsters know that the Gen Xers will not go quietly into that good night.